The Toyota Supra is one of the fiercest vehicles on the planet boasting some of the most incredible track statistics for a sports car of its kind. The masterful Japanese engineering means that Toyota have firmly taken their place on the market as one of the most impressive sports car providers around. The Supra is proven to compete with almost any supercar out there and for a fraction of the price. For an adrenaline thrilled rush, you don’t always need a luxury supercar when you have this piece of absolute gold! Checkout our range of Toyota experiences available to book now below. 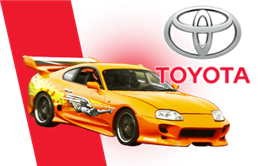 Top Toyota Driving Experiences Near Me

See 14 locations map
If you love famous movie cars, you'll love this Fast and Furious inspired driving experience. Take the wheel of the iconic Japanese powerhouse the To ...

See 14 locations map
Here is your chance to drive four instantly recognisable cars from the hugely popular Fast & Furious franchise. Chose four cars from a fleet that fea ...
£155.00
View
SAVE 50%

Bovingdon Airfield
Film fanatics will absolutely love this epic Three Movie Car Blast experience as they will get the opportunity to drive some of the legendary vehicle ...
£109.00
View
SAVE 30%

See 14 locations map
Here is your chance to drive five instantly recognisable cars from the hugely popular Fast & Furious franchise. Chose two cars from a fleet that feat ...
£229.00
View
SAVE 50%

Bovingdon Airfield
Drive the incredible turbocharged Toyota Supra on the purpose-built track in Hertfordshire. This amazing car is in the iconic orange and has the Fast ...

See 15 locations map
Have you ever wanted to drive a car that you've seen on the silver screen? Now you can, thanks to this fantastic driving experience. You will get the ...

Bovingdon Airfield
Movie fans rejoice as this One Movie Car Blast driving experience at Bovingdon Airfield in Hertfordshire is sure to provide an unforgettable day out. ...
£59.00
View
SAVE 32%

See 14 locations map
Here is your chance to drive three instantly recognisable cars from the hugely popular Fast & Furious franchise. Chose two cars from a fleet that fea ...
£155.00
View
SAVE 50%

Bovingdon Airfield
The six supercar blast offers you the chance to drive a range of cars that cover both supercars and performance cars at the purpose-built track at Bo ...
£199.00
View
SAVE 34%

See 14 locations map
Here is your chance to drive two instantly recognisable cars from the hugely popular Fast & Furious franchise. Chose two cars from a fleet that featu ...
£119.00
View
SAVE 42%

See 14 locations map
Here is your chance to drive an instantly recognisable car from the hugely popular Fast & Furious franchise. Chose your favourite car from a fleet th ...

Bovingdon Airfield
Drive the incredible turbocharged Toyota Supra on the purpose-built track in Hertfordshire. This amazing car is in the iconic orange and has the Fast ...
£69.00
View
SAVE 39%

See 15 locations map
Have you ever wanted to drive a car that you've seen on the silver screen? Now you can, thanks to this fantastic driving experience. You will get the ...
£139.00
View
SAVE 30%

See 15 locations map
Choose five famous movie cars to drive with the Double Movie Car Blast driving experience. Pick from a fleet of cars made famous on the silver screen ...
£229.00
View
SAVE 50%

Bovingdon Airfield
Drive a selection of some highly impressive and insanely quick supercars along with some high-performance cars. Drive 8 laps in each of the six cars ...

See 4 locations map
If you can't choose which one of our movie cars to drive, then this is definitely the experience for you! We Provide the chance to drive three of our ...

What is a Toyota Driving Experience?

Toyota have made some great cars over the years combining power and pace with aggressive looking styling. You can experience this power in cars such as the Toyota Supra which is the popular choice for many drifting drivers.

Our car of choice is the modern Supra model which has been brought to the limelight by the popular film franchise 'The Fast and Furious'. If you love the films or know someone that does then these experiences make a great gift as every bit of care and attention has gone into making the cars look exactly the same as the one in the films. They are not far off the speed and power either ranging from 400 - 600 bhp!

There are a variety of booking experiences you can partake in including the opportunities to drive the Toyota Supra alongside some of the most powerful supercars in the world, including Lamborghini, Ferrari, McLaren and many more!

The styling and the performance does vary depending on which venue you choose, but whichever Toyota experience you pick you can either order as an open gift voucher or book directly onto a date.

Where Can I Book a Toyota Driving Experience?

Here at TrackDays we’re working hard to try and ensure that we have as many locations available for our Toyota experiences as possible! We’re committed to trying to provide everyone around the UK with a platform to get behind the wheel of these incredible vehicles, so regardless of where you are, we have you covered.

We have a variety of popular locations for this experience across all regions of the UK. If you want to see where is closest to you, why not utilise our map tool whereby you can see the closest locations based on where you sit on the map. Alternatively, if you want to see what packages are in your area, then filter by “Region” and that will allow you to see the individual experiences closest to you.

Our Toyota experiences span the entire UK including the South West in Cornwall, to the East in Norfolk, all the way through the Midlands even up to the North in Scotland - so wherever you are, rest assured that TrackDays will be able source you the perfect experience.

How can I book a Toyota Driving Experience?

Booking your Toyota Driving Experience has never been a more succinct and simple process than it is today with TrackDays. We have spent time working towards creating a system with a variety of payment methods and a selection of booking options that make things as accessible for our customers.

If you’re booking your Supra experience for yourself then you’ll definitely want to opt for our live date availability calendar option. This gives you the opportunity to see all the times and dates available for the package you have selected allowing you to select the right slot that fits you and securing your place there and then! It removes the problem of having to select times that might be as desirable and gives you full control of the booking process.

Alternatively if you’re booking for someone else, then you’ll want to check out our open date gift vouchers. These are a fantastic option as a Christmas, birthday or special occasion gift. The voucher has a validity period of 10 months allowing the recipient to book any slot in the time period. They can redeem the voucher online and then utilise the live date availability calendar or even get in contact with our helpful customer service team.

But regardless of which option you choose, we can get your Toyota Experience off the ground today and get you behind the wheel with consummate ease!

With only seven words, Vin Diesel changed the motorsports world in 2001. You owe me a ten-second car. The Toyota Supra wasn't born a racing and performance icon, so why do we see it all over Youtube, sought for by every JDM speed collector? The attraction of the Japanese domestic market is so strong now, and it has given us so many icons: Supra MK4, Subaru WRX STi, Nissan Skyline GT-r R34, and Mitsubishi Evo.

They were prohibited to import into the United States for much of the past several decades - and yet featured in movies and games as the world's finest tuner cars. The MK4 Supra reigns supreme among import drag cars. The Grannas Racing team famously achieved a 7.17 second run at 205 mph with 'Orange Man Bad' in December 2019 - and a 6.9 second quarter mile at 194 mph - making it the fastest 6 gear stick-shift in the world at the time.

Calm down for a second, because we're getting carried away - Orange Man Bad is an 1800bhp Supra, which is essentially a rocket. However, the Supra MK4 has the unique ability to be customised right down to the atomic level, which is why it is so popular among modding enthusiasts.

Things will start to become less interesting if we go back to the MK4's predecessors. It began as part of the 'pony car' fad, which was sparked by Ford's introduction of the Mustang. Mid-size cars with powerful engines at a reasonable price. Pony cars have had such an impact on what we see and enjoy today - high-performance production versions created in collaboration with factory-sponsored racing to achieve a marketing and performance advantage.

Toyota, understandably, wanted in, and in 1970 the Celica was released. The Celica XX was built in 1978, but Toyota America did not like the moniker, so it was renamed the Celica Supra! The MK1 and MK2 Supras were disappointingly mediocre, and the MK3 received some significant engine upgrades in 1986, but it also gained a lot of weight (500 pounds), so it still struggled for performance.

However, in 1987, Toyota added a turbocharger to the engine, which produced 230 horsepower, and the Supra name was officially adopted and renamed the Supra Turbo. The Supra's speed and integrated rear spoiler made it instantly desirable.

The MK3 became the notorious MK4 in 1992, thanks to the introduction of the 1JZ, a high-performance straight-six engine. By 1993, Toyota had reduced the MK4's weight by 200 pounds and released the 2JZ engine, which is a more powerful version of the 1JZ. Because it was almost indestructible, the 2JZ has become a worldwide legend. As a result, the Supra abandoned its boxy design, reduced weight, and was equipped with one of the best engines ever created. Because of the 2JZ's sturdy nature, even vehicle modders with just a little expertise could change out a few components and crank up the boost - in fact, few engines are simpler to alter and tune than the 2JZ.

As a result, ludicrous figures began to come in, such as 800BHP.

The MK4 looked nice, had the greatest engine, rode smoothly, had incredible brakes, would outperform an Aston Martin, and cost half as much.

The MK4's appearance in Fast and Furious introduced a whole generation to the Japanese performance scene - and served as the foundation for an entire culture. What makes a vehicle like this even more famous in all of these instances is that manufacturing was halted. As a result, there are just a few MK4s left in the world, and a pristine example might easily reach six figures. There’s plenty of demand - but no supply - so the legend keeps growing.

The product review score is based on an average score from reviews collected by Feefo.com

After an event, Feefo sends an invite to the attendee to rate the experience, venue and supplier from 1 to 5 stars.

If you would like to see the Feefo reviews of this product please click through to the product page.